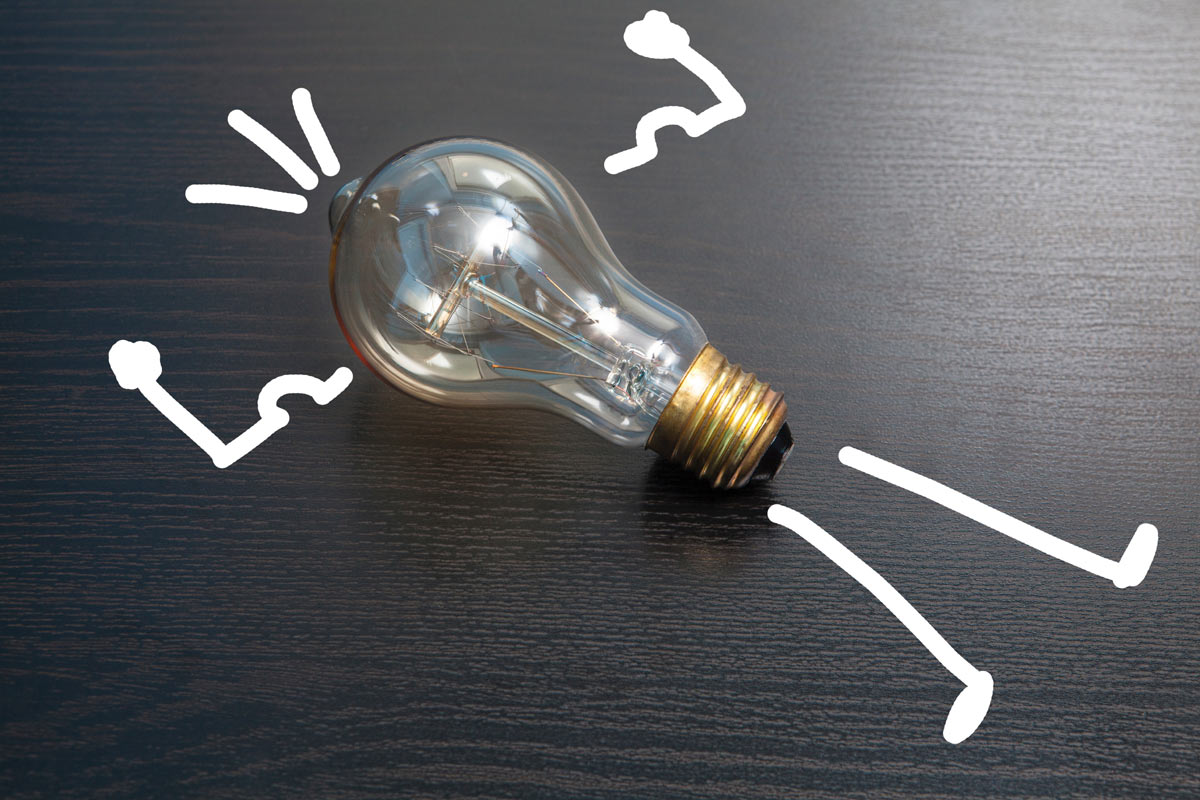 Finding Your Zone of Genius

Have you reached your true potential? If not, what’s holding you back?

Do you know what your true potential is?

In this post, we’ll be diving in to the possibilities of aiming higher and achieving much, much more than we ever thought possible.

There’s a very popular book that hit the shopping carts in 2009 called The Big Leap, by personal growth guru Gay Hendricks, that refers to a  concept called your “Zone of Genius”.  In Hendricks’ book he explains there are four zones we all operate from:

1. The Zone of Incompetence: In this zone, you are engaging in something you inherently do not understand or are not skilled at.

2. The Zone of Competence: In this zone, you are doing what you are efficient at, but recognize that many people are likewise efficient at it, thus not distinguishing your capabilities in any significant way.

3. The Zone of Excellence: In this zone, you are doing something you are tremendously skilled at. Often, the zone of excellence is cultivated, it’s practiced and established over time.

4. The Zone of Genius: In this zone, you capitalize on your natural abilities which are innate, rather than learned. This is the state in which you get into “flow,” find ceaseless inspiration, and seem to not only come up with work that is distinguished and unique, but also do so in a way that excels far and beyond what anyone else is doing.

Now, he’s not talking about how to become a genius, but how to enter into that special, personal ‘zone’ as we’re calling it, that uses your best skills to the fullest and what will bring you the most fulfillment in life.

Most successful people build their careers in their zone of excellence, the area of life in which your skills are proficient. The problem with the zone of excellence — and the reason why so many people in it are most unhappy — is that it doesn’t take you into that special place…that ‘I feel the most fulfilled’ in. If you can pinpoint, the one skill or talent in your zone of excellence that you feel most comfortable with, and at ease with, then that is the place where you can actually thrive.

As you can probably imagine, highly successful people function in the ZOE, in which they are doing things at which they are highly skilled. But staying in this zone is ultimately unsatisfying, though, because it does not engage the innate genius of the individual.

Also, in the book, Mr. Hendricks poses four questions to help you start to identify your Zone of Genius:

• What do you most love to do?  (In other words, this one thing, you love so much, you can do it for long stretches of time without getting tired or bored.)

• What work do you do that doesn’t seem like work?  (you can do it all day long without ever feeling tired or bored.)

• In your work, what produces the highest ratio of abundance and satisfaction to amount of time spent?  (Even if you do only ten seconds or a few minutes of it, an idea or a deeper connection may spring forth that leads to huge value.  Whatever that one thing is, find it   and put the highest priority on doing some of it every day.)

• What’s your unique ability?  (There is a special skill you’re gifted with.  This unique ability, fully realized and put to work can provide enormous benefits to you and any organization you serve.)

As with any other kind of lasting, meaningful change, commitment is the gateway to the zone of genius. Make a commitment to blocking out just thirty minutes a day in their calendars to devote to cultivating their genius. The thirty minutes can involve journaling, meditating or any number of other activities, just as long as you are focusing on your genius for thirty uninterrupted minutes. After you have gotten your thirty minutes a day you’re your routine, then, bump it up to forty five minutes. Ultimately I want to see people I work with spending 90% of their time in their zone of genius, but you’ve got to start somewhere and my recommendation is to start with 30 minutes a day.

Your zone of genius is what’s most effortless for you. If you are truly able to relax and begin the work, you recognize that you are able to create almost instantaneously, and without too much thought. When you combine this natural talent and skill with hours of practice and repetition, you find yourself among the small percentage of people who can break through and redefine an industry.

But the point is that it begins with you.

The important thing to recognize is that your zone of genius is not just what you’re “passionate” about. It’s not just what you like the idea of. In fact, it can often be something you may not love a whole lot initially, but it’s something you recognize you are naturally gifted at. When you can identify those skills or interests, you can capitalize on them by working on them consistently. The combination is what will help you strike gold.

Ultimately, it’s not about what someone else thinks of you and your abilities, but identifying what comes most naturally to you, and then capitalizing on that, rather than identifying what has come naturally to other people, and trying to teach yourself those skills in order to mimic and recreate their genius. You can absolutely be successful in the zone of excellence. But to take your life to the next level, you cannot keep playing by other people’s rules.

When you’re “in the zone” or, in other words, “in flow,” you feel completely immersed in the work you’re doing and have a strong sense of confidence about the skills you’re using. You’re enjoying the process and you have a high level of mastery with the tasks you’re accomplishing. When you’re operating in the zone, work is fun, exhilarating, and meaningful.

Below is a diagram that helps to understand the concept of Zone of Genius better: 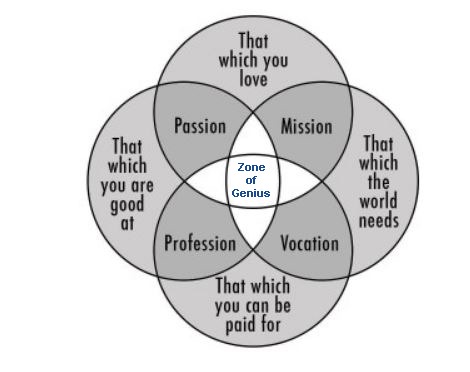 “I call this framework your “Zone of Genius.” Your Zone of Genius is comprised of two essential data points: your genius and your purpose. Your genius is the thinking or problem solving that you’re best at; it’s what allows you to be challenged in the best way possible. Your purpose is the impact  on the world, or others that’s most meaningful to you.“

When you know both your genius and your purpose and commit to incorporating them in your career, I can almost guarantee you’ll find your work more engaging and fulfilling.

But sometimes, there are people that get in the way of our hopes and dreams. Sometimes, that person is not someone else, but ourselves. We have a natural tendency to have negative thoughts, don’t we? Thoughts that limit our potential and opportunity.

We know that some of the most common, negative, self limiting thoughts we have are:

• I don’t have enough degrees

• I have a poor reputation from my past

• I don’t have the support I think I’ll need

• I don’t have the finances I think I’ll need

• I don’t have the time I think I’ll need

But saying ‘yes’ to the ZOG means saying ‘no’ to other things. If we don’t like administrative tasks, but either say ‘yes’ to doing them or let others assign us to those types of tasks, then we’re perpetuating the problem by not controlling the problem. We need to redirect, or delegate, whatever you need to call it, but have someone else do those things.

How do we apply this to ourselves?

Once we find out what our ZOG is, do we really want it? Can we commit to it?

Once you start operating in your Zone of Genius, you’ll see just how powerful it is — and want to operate within it all the time. Answering the questions consistently allows you to be more strategic about using your Zone of Genius at work, while ensuring you’re building behavior habits that really matter for happiness and success.

Once you commit to understanding your Zone of Genius and putting it to work, get ready to say goodbye to boredom at the office and the feeling that you don’t know what you’re best at. Work will start to feel like an extension of who you are — not just a job. That’s the most powerful tool you have for achieving the success you dream about.

So what about you? What do you think your ‘zone of genius’ skill is? Take some time to think about this. It may take an hour…a day… a week. Or if you’re not sure, ask other people that know you well. Not just the ones that work with you, but people that really know you for quite some time.

Here is a list to get you started and thinking about what may apply to you:

 Taking the complex and making it simple

 Caring for someone

This list is just to get you started on thinking about all the different things you do…or could do so that you can come to some sort of conclusion on what your specific skill is that lets you enter into the ZOG.

The excuses are endless, folks, but so are the possibilities.

“The end point isn't the goal. The journey is the goal.”

For more tips, tools and motivation to help you on your online, small business journey, sign up for the weekly emails HERE. Learn from my successes as well as my mistakes that will hopefully give you clarity and a strategy as you plan your new small business launch.

If you’d like some help in turning your dream of having an online business into a reality, click on the ‘Get Coaching’ button below.